For thousands of years great shoals of herring entered the coastal waters of the Isle of Man. Probably there were herring fleets in the days of the Norse Kings of Man. Certainly the first fishing boats that we know anything about were open boats like Norse vessels with large square sails and their hulls made of overlapping planks.

‘Scoutes’ or ‘Square-Sails’, was the name given to these early fishing boats. The square sail of coarse cloth was hung off a wooden yard attached to the mast standing midway between stem and stern. The mast was supported by standing rigging. The sail was the main source of power but when the weather was calm or the wind was blowing head-on, the crews had to use long oars. An old painting suggests that the length of the ‘scoutes’ was about 9 metres. The hill was double-ended and the seams were made water-tight by pressing wool dipped in tar where planks overlapped. The keels were usually made of oak and the planks of pine. A short oar was often used instead of a rudder. When water got into the boat there was only a ‘spoocher’ – a wooden ladle or bucket – to bail it out.

A letter written in 1786 suggests that by that date there were larger versions of the ‘scoute’. It states that:

“…three hundred and forty Manks boats from 9 to 12 tons each carrying seven men are usually employed in the herring fishing of this Island. Their boats are all open and most of them capable of crossing the Channel although they seldom do it unless they are employed in some illicit traffic”.

The “illicit traffic” means smuggling. After 1765 when the Island was sold to the British Crown, smuggling became more difficult and fishermen gave more attention to their main occupation. We know that there were Manx fishermen who fished further afield than home waters because “fower ancyent men – Mallo Caloe, William Kerush, John Christen and William Corran” – who were called on to give evidence in 1611, described themselves as “fishers driving for herring in the North of England with Manx boats”.

Many of the men who ventured out into these small boats during the herring season were farmers and crofters. William Blundell, who spent some time on the Island in the 1650s wrote: “The sea feedeth more Manks-men than the soil“.  The takings from the sale of the herring were divided into eight shares in early times, three shares went to the owners of the nets (often farmers), one to the owner of the boat and a share each to the four men who operated the boat.

Life aboard the ‘scoutes’ was very hard. The ballast of stones carried to stead the boats as they lay at the nets was not sealed in any way. Nets, corks, buoys and the catch of fish lay on top of the ballast. If a sudden storm came on, the ballast might move and cause the boat to capsize. The ‘scoutes’ were described as “our poor shells” when a letter had to be written in 1754 to Whitehaven to explain an incident off Langness between Manx boats and some much larger English herring boats known as ‘busses’.

There must have been much loss of life during the herring fishing around the Island over the centuries but it was the great disaster at Douglas harbour entrance on the night of September 20th/21st, 1787 which led to a new design of fishing boat and the end of the ancient ‘scoute’ type of vessel. The ‘back’ fishing off Douglas was in full swing and probably about 300 boats had gone out to fish on the fateful evening. A southeast gale sprang up and forced the fleet to abandon fishing and make for harbour. Unfortunately a severe storm in the year 1786 had demolished the old Douglas pier and its lighthouse. Repairs had not been carried out and only a lamp set up on the ruins of the old quay acted as a substitute light. As the returning herring fleet made for the entrance to the harbour, one of the boats struck and destroyed the post supporting the light. Darkness and chaos followed.

Some boats mistook lanterns on the beach for the quay light and drove ashore on the beach behind the quay. One way or another, many boats were lost – perhaps up to 50. At least 21 men drowned. For almost a century afterwards Manx fishermen would not fish on the date of the Douglas disaster. When the Manx fishing fleet was renewed, all the replacement vessels were at least partly decked and a new type of fishing boat adopted.

The new fishing boats were called ‘smacks’ and were the chief herring boats for the period roughly 1790 to 1830. They were similar to a common type of boat used along the west coasts of England and Wales. The ‘smacks’ were fore-and-aft (cutter) rigged vessels unlike the old ‘scoutes’ with their single square rig. They had a single mast and three sails. The sails were mainsail, forestay-sail and jib. This type of boat was built in two sizes – smalls ones of 8 to 12 tons used in the herring fishing and larger ones, 40-60 tons used for fish buyers or merchants trading with Mediterranean countries. John Feltham, who wrote of his visit to the Isle of Man in 1797, said that Manx boatbuilders were uncommonly clever “constructing entirely by the eye, making no use of line or rule, unless in laying the keel“. According to his description, the herring smacks were 7 to 10 metres long and 4 metres across at the widest part. A disadvantage with these boats was that the mast could not be lowered.

The half-decked smacks gave some protection when men were eating or sleeping. There was a pump instead of the ‘spoocher’ used on the old ‘scoutes’, but no stove for cooking and oars continued to be used. Hauling the nets was a gruelling task when a wind was blowing and the sea rough. A Manx newspaper account written in 1848 describing life on a small fishing smack earlier in the century states:

“…there was no stove on board, and each man of the crew brought his provision wallet, or ‘murlin’ (an osier basket) on his back, with a bannock, oatcake or barley bread, some cheese, mayhap, and his butter-box for this feed…”.

The crew of a herring smack was usually six men. The takings were divided into 9 shares – 2 for the owner of the boat, 1 for the net owner if the nets were hired, and one share each for the crew.

The illustration of Richard Karran’s smack “Maria” of Port St Mary, shows the larger type which sailed to foreign ports. The “Maria” was probably registered in 1789 and was of 46 tons burthen. We hear of even bigger smacks including one built at Crellin’s shipyard in Peel in 1793 with a burthen of 60 tons. Some of these larger smacks traded with such ports as Naples, Genoa and Leghorn in Italy. They would carry a cargo of red herrings or salt herrings on the outward voyage and return to Britain with cargoes of onions, fruit or wine. When the herring fishermen made the change from open ‘scoutes’ to the halfdecked smacks following the disaster at Douglas in 1787, they probably copied the new boat design from larger vessels of this type already in use by fresh fish buyers and red herring traders. The large smacks themselves would join in the herring fishing sometimes, when trade was slack.

Another type of boat seen in Manx waters in the 18th and early 19th century was the two-masted ‘wherry’, used by fresh buyers who would meet the fishermen at sea and buy herring for a quick passage to ports in England and Ireland. These light, fast boats were not necessarily Manx built. 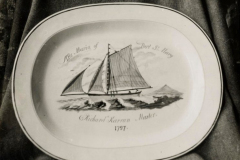 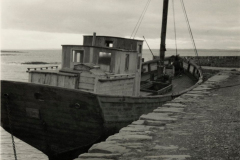 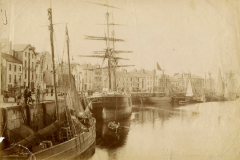