The Chi-Rho is one of the earliest forms of christogram, and is used by some Christians. It is formed by superimposing the first two (capital) letters ‘chi’ and ‘rho’ (ΧΡ) of the Greek word “ΧΡΙΣΤΟΣ” = Christ, in such a way to produce the monogram. Although not technically a Christian cross, the Chi-Rho invokes the crucifixion of Jesus, as well as symbolizing his status as the Christ.

The Chi-Rho symbol was also used by pagan Greek scribes to mark, in the margin, a particularly valuable or relevant passage; the combined letters Chi and Rho standing for chrēston, meaning “good.”

This Irneit cross-slab on the Isle of Man has a clearly cut hexafoil pattern within circles, below which are two well cut crosses with small arcs curving from the expanded upper arm, representing the Chi-Ro. The inscription within the circle, in debased Roman characters, records a Celtic bishop, Irneit. The Chi remains, but some of the rest of the inscription is damaged. It is also abbreviated, but reads as follows with the omitted words in brackets: 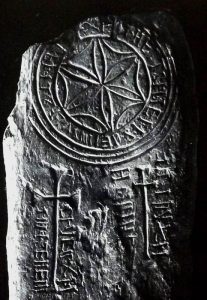 Below the circle are two linear, but formal crosses. At the sides of these crosses are inscriptions reading downwards as follows:

In Ih((s)u Xp(ist)i/nomine; meaning, In the name of Jesus Christ and Crux xp(ist)i/imagenem,; meaning, The image of the cross of Christ (I have made in Christ’s name an image of the Cross of Christ). These translations show a connection between the early Manx church with Britain and Gaul.

It is late 7th or 8th century.

The ‘Seven Mollys’ of the Isle of Man