King Orry’s Grave is in two parts, one behind a house and the other across the road and up the hill. Both are the remains of Neolithic tombs about 5,000 years old.

►Site 1 (on the road)
These are the remains of a prehistoric chambered tomb. ‘King Orry’s Grave’ was built and used by a community of farmers about 5,000 years ago, who were able to devote spare time and resources to the construction of a tomb in remembrance of their ancestors. The tomb consisted of a line of stone-built chambers buried under a cairn of earth and stones.

The entrance to the tomb lay between two boulders at the centre of the arc of standing stones. These stones supported the cairn, most of which has since been removed. The arc of boulders defines the forecourt.

There were at least three chambers beyond the entrance. They were roofed with stone slabs and covered over to create the cairn. The chambers would have been filled with burials, starting with the furthest. When excavated, almost no remains survived: only the traces of a single burial, together with fragments of an early Neolithic bowl, were found in the nearest chamber.

Access to the tomb took place during commemorative ceremonies held in the forecourt. The passage into the tomb, and between chambers, was deliberately difficult, reinforcing the division between the living world and the afterlife. These ceremonies left traces of a hearth and worked flint tools in the forecourt.

The tomb was abandoned during the Neolithic period. Since then, the blocks above the entrance have collapsed into the forecourt, the cairn material has been robbed to build nearby walls and to construct the road, and a bank of earth and stones closed off the forecourt. 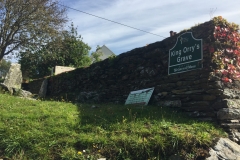 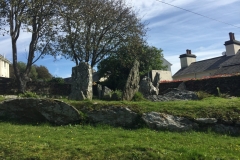 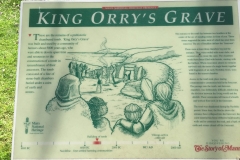 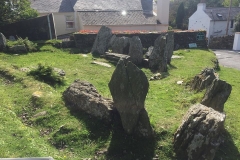 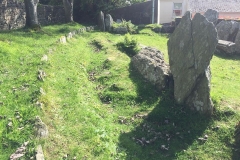 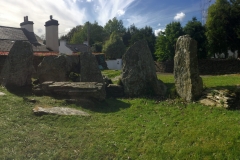 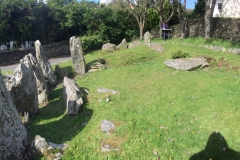 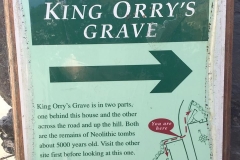 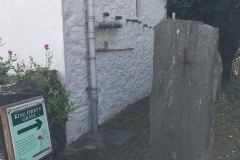 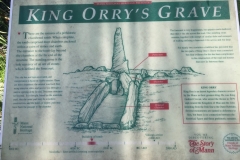 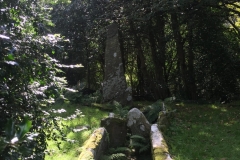 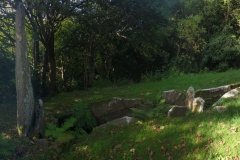 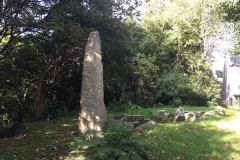 ►Site 2 (behind the house)
These are the remains of a prehistoric chambered tomb. When complete, the tomb comprised three chambers enclosed within a cairn of stones and earth. The entrance to the tomb lay beyond the chambers at the far end of the structure. The standing stone is the sole survivor of an arc of stones which defined the forecourt.

The site has not been excavated and interpretation is based on visible remains. There are three chambers: the nearest was built first using massive slabs and access was through a narrow opening at the far end. Two more structures lie beyond. It is thought, based on the materials used, that the outer part may be a modern construction and the inner, or nearer part, may have been the passage to the chamber.

The forecourt is very fragmentary, but appears much shallower than that at the site across the road. One standing stone remains, together with stumps of similar slabs and remnants of walling defining a forecourt 12m across and 4m deep.

For nearly two centuries a tradition has persisted that the two parts of King Orry’s Grave were connected but clear evidence for this has been complicated by the construction of the road and houses that now lie between them.

Kind Orry is an almost legendary character revered by the Manx as their greatest king. He was King Godred Crovan, who seized the throne in 1079 and created the Kingdom of Man and the Isles stretching from the Irish Sea to the Outer Hebrides. Several monuments are named in deference to him, but there is no connection between the historical figure and these prehistoric remains.

(source: text is from Manx National Heritage and on placards at both sites; photographs are by Bernadette Weyde)