The chapel on St Michael’s Isle on the Isle of Man is an example of the type of building erected by the Norse-Celtic Christian community probably in the earlier part of the 12th century, prior to the establishment of the parishes and their churches, by differing from the earlier keeills in that they were intended for congregational worship. Despite repairs to the walls and thee probable re-setting of some openings, the church retains the ground plan and several structural features of its 12th century origin.

The chapel is constructed of locally available stone including roughly squared limestone blocks, pieces of volcanic agglomerate together with shore boulders, all levelled up with slate rubble set in the mortar. It was originally roofed with Manx slate.

The rectangular structure has a window in each gable, the western one topped by a bell-cote, and a door in the western end of the south wall. The building appears to stand on its original foundations and the walls up to the level of the window openings and in some places higher – appear to be original.

The original was divided into three areas: an easternmost section containing the base of an altar and a possible “safe” for the church valuables – perhaps even a holy relic; a middle section with stone benches along the walls, and a slightly larger western section containing the doorway. This has bar-holes suggesting that the door could be secured from inside. It is therefore possible that there was a resident cleric. 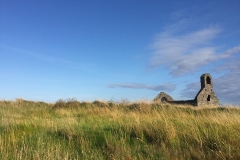 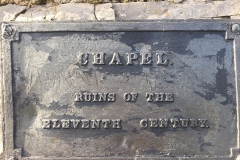 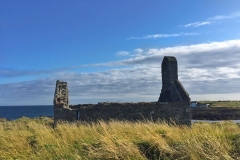 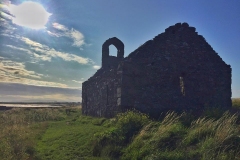 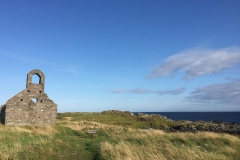 The chapel is surrounded by a burial ground enclosed by stone and earth banks. The earliest graves – lintel graves, lined and capped with stone slabs – suggest the presence of an Early Christian keeill on the site. It is not known when the chapel ceased to be used but records show that it has had no roof for the last 300 years. However, the burial ground appears to have continued in periodic use until 1870 – latterly for shipwreck victims and by the small Catholic community in the south of the Isand.

(source: text from plaques at the site provided by Manx National Heritage; all photographs by Bernadette Weyde)

Hares & Witches & ”Rough Under the Foot”