Signed from the road, St Patrick’s Chair stands in a field called Magher y Chiarn (field of the Lord) and is a collection of stones with some set vertically, two of which have carved crosses on them. It rests in a field with views of Chibbanagh plantation and you can see the Iron Age and Viking farmsteads at the Braaid in the distance.

The site is one of two ‘chair’ formations on the Island linked to St Patrick with the other near St Trinian’s Church on Greeba Mountain. So what exactly is it? Well, there is no clear answer to that as it is still open to interpretation but folklore says that when St Patrick came to the Island there was a meeting held here, where he preached and blessed the people.

The monument is thought to be early Christian but whether the stones are in their original place or not, is also unknown as Walter Gill reports in 1929:

‘Dr. Oliver, of Douglas, says that the late Vicar of Marown informed him that the so-called St. Patrick’s Chair was erected about seventy or eighty years ago by the then tenant of the farm, who was an eccentric person and erected this for a house. The late Vicar resided in the parish at the time the erection was put up, and was personally acquainted with the farmer.”-(Ordnance Survey Name Books.) The Surveyor adds the following comment: “The stones have the appearance of age, and in my opinion have undoubtedly been placed in position some centuries back.”

Romilly Allen, in a paper on “Early Christian Monuments of the Isle of Man,” in the Journal of the British Archæological Association, vol. xliii., page 240, says the crosses belong to a period falling between A.D. 400 and 700.

The reference to “a house,” even if only a tool-house or cattle-shelter was meant, at least suggests that the monument was formerly more extensive than it is now, and perhaps included a dolmen. Or it may be that the tenant built a structure round the incised stones which has since been removed. A hedge formerly ran a few yards to the North-East of the relic; though marked on the Ordnance Map it is not now visible, but is remembered. A tablet affixed to the mound seriously states that the pillars commemorate the first preaching of the Gospel in the Island. The same legend is related of Chibber Pherick (St Patrick’s Well) near Peel, and of other places.’ 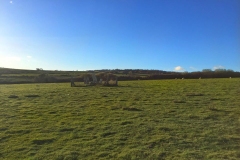 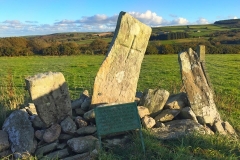 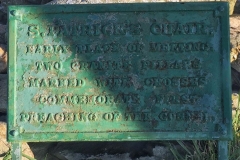 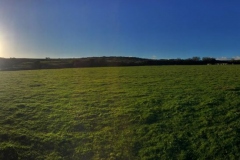 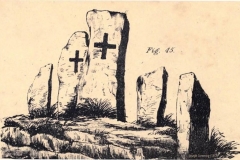 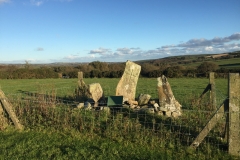 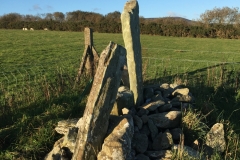 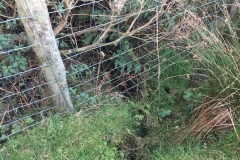 Looking at Joseph Cumming’s sketch of it in 1857 (see photograph), you can see that between then and now some of the stones have been moved so it has been messed about with.

There is an interesting article by Ray Moore on various interpretations of the monument here: http://bit.ly/2yLhxEe. Well worth a read.

I tried to find the well reportedly associated with the site but the gorse was so overgrown it was impossible to see anything.

(source: Gill text from A Manx Scrapbook (1929); Cummings photograph from The Runic and Other Monumental Remains of the Isle of Man (1857); photographs by Bernadette Weyde)