We first hear of the Quakers (aka Society of Friends) in Lord Fairfax’s time (1651-1660), when the governor prohibited anyone from receiving them into their houses, and the Quakers themselves were forbidden to meet amongst themselves “in the fields, or any out-house, or other place on the Lord’s Day.”

They seemed to have lived, for the most part, in the parish of Maughold where their burial-ground, called Rhullick-ny-Quakeryn, is situated. The chief among them were William Callow of Ballafayle, John Christian of Lewaigue, Ewan Christian and Ewan Kerruish. They were constantly imprisoned and illtreated for not paying tithes both before and after the Restoration.

In 1665, William Callow, the only one of whose life we know anything about, and others, were banished from the island for their religious convictions. William Callow appealed to the Duke of York (afterward James II) and Prince Rupert, and obtained a letter from the latter to the Earl of Derby, with a request that he should give Callow leave to return to the island and restore his property there to him. The earl declined, stating that he would not have the island infected with heresy, and, to a despairing letter addressed direct to him by Callow, he returned the same reply.

Callow then took himself to London. This we learn from some notes by him in the pages of his Bible, which are as follows:

“I, WILL CALLOW, of Ballafayle, Manksman, who have been banished out off the Ile off Man by the Bishops and Priests for conscience towards God, above two years and three months from my dear wife and tender children, and have bought this book the rate 8s 10d in London where I am now in Robert Bridge’s house in Hosier lane, coach builder, near Smithfield. I say this day being the first of the 11th month in the year 1667 as witness my own handwriting the day and year above said.”

He then proceeds to give particulars of his birth and that of his wife and of three sons and of six daughters.

In 1672, when Charles II issued his “Declaration of Indulgence,” he and the other banished Quakers were allowed to return to the island. The notes in the Bible, which were continued by his son Robert, tell us that he died in 1676. He was interred in the burial ground.

The burial ground is a lovely place to visit and is very special.  It is a small, initimate plot, surrounded by stone walls and is also opposite a neolithic burial cairn.

You can read more on the tragic persecution of the Quakers on the Island by AW Moore here, and by Thomas Hodgkin here.

Some of the above text is from Manx Worthies by AW Moore.  Photographs by Ber Weyde. 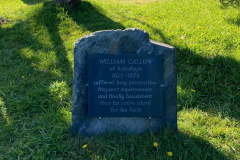 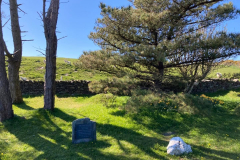 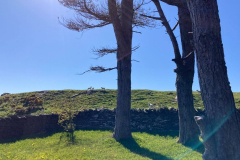 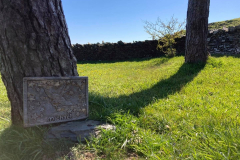 Old Man and his Dog