Suggane is the rope made of the twisted straw of wheat, barley, oats or rye, and it a was very important home-made product of Manx farming life up to the end of the last century. First and foremost among its uses must be mentioned the fact that suggane was made to tie down the thatch roofs of cottages and farm buildings, the bands of rope being passed across the roof between the stone pegs or ‘bwhid-suggane’ which were placed at intervals near the top of the walls. When thatch was replaced by slates, suggane did not fall entirely into desuetude; it was still twisted on the majority of the farms for tying down the stacks of hay and corn in the yard. This was the function which survived the longest and although there may be a few farms where suggane is used on the stacks today, in the great majority of cases it has been replaced by the rope made from coconut fibre known locally as ‘kayar’. 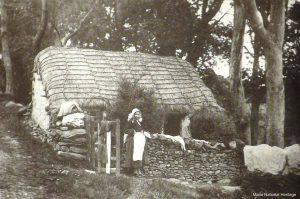 An early use of suggane is mentioned by S.W. Ryley in ‘The Itinerant, or Memoirs of an Actor’ published in London in 1808. According to Ryley, Manx chaises were drawn by ‘rough, uncouth, ill-matched horses, harnessed to the carriage with ropes, or sometimes with bands of hay,’ and suggane may well have been used for drawing sleds, harrows, rollers and other agricultural equipment. Those days are long past, as also are the days when the country people carried potatoes from the fields in straw-rope creels slung over their shoulders, or set off for the town with the farm produce borne in suggane panniers suspended one at each side of the horse’s back.

In one of his colourful verses, William Kinnish, the Kirk Michael poet and inventor, recalls another use of these creels:

“But, North Barrule, I first would sing of thee,
For I was nurtured on thy shelving side;
Full well I yet remember when, with glee,
I on my pony to thy top would ride
To fetch the well-dried turf for winter’s fire
Pack’d as a load upon its shaggy back*
In straw-made creels, while my grey-headed sire
Watch’d my return to place them on the stack.”

Within living memory in Andreas and Bride, the slouree‡ occasionally depended from the end of a length of suggane – though ‘gadd’ was also used for this purpose. Sometimes even part of the chimney-flue itself was formed of a funnel-shaped framework of laths laced with lengths of suggane and finally covered over with ‘mud’ plaster. Such a chimney existed in a cottage near the Lhen until this year when it was rebuilt.

These, without doubt, are only a few of the uses of this particular commodity. The ingenious Manx crofters who, seemingly, made good use of almost everything at hand and wasted nothing.

It is possible if you have the knack (and some farmers have it still) to twist long lengths of this rope by binding the lengths of straw round and round the thumb (thumb-rope), but in the main farmers had recourse for their rope-twisting to a special implement embodying an idea which, even in so small an area as the Isle of Man, has been subjected to many and various interpretations.**

In the Museum collection there are seven examples of the suggane-twister (Manx ‘coar’***), and no two are quite alike. And the same diversity appears among the straw-rope twisters of other parts of the British isles. This great variation in form makes it essential and of real importance that we should build up as big a collection of suggane-twisters as possible and for this purpose we seek the active help of all who are interested in Manx folk-culture.

As will be seen from the illustrations, some are rude, palpably home-made appliances, whilst others are equally certainly the work of an expert hand, such as the local smith. In the first category the twisters from Kirkell, Kirk Bride and Cregneish are outstanding and to the second belong the pair from Ballagawne, the Rhencullin and Ballastrang examples.

Our Manx twisters may be considered in three groups according to their shape, and the way in which they were intended to be used. 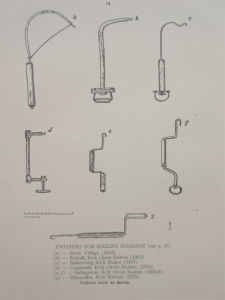 The first group (a-c) – In its simplest form the twister is scarcely more than a bent, hook-shaped rod of wood with a revolving wooden grip or loop for holding the tool. Such twisters are still in use in Country Donegal, and probably in other parts of Ireland also. 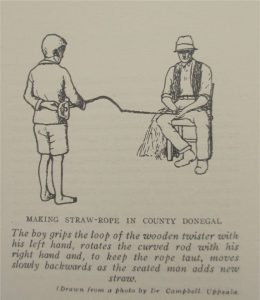 Figure 1(a) – This twister was made for the Museum in 1925 by Mr Henry Sayle of Kirk Bride village. It was the form with which he was familiar and we have been told that the same kind was used within the last ten or twenty years at Staward (Kirk Christ Lezayre) and Knock y Doonee (Kirk Andreas). Up to the present we have no information of any other form being used in the Northern parishes and it is likely that this, or the Kirkell variety in figure 1(b), was formerly used all over the Island. The string stretched across the bow was to lend rigidity to the seasoned willow-rod.

Figure 1(b) – The Kirkell (Kirk Christ Rushen) twister was rescued this year by the Director of the Museum who found it broken into three pieces. In principle it is similar to the Bride example except for the loop intended for holding the end rigid with the left hand, while the L-shaped wooden rod was rotated with the right hand in much the same way as shown in the accompanying sketch.

In Man the left hand was generally used to grip the end of the implement but it was held in front of the body, while the Bride twister was apparently used with both hands on the grip. As it was necessary to keep the rope taut while twister, it must have been hard work.

Figure (c) – Four years ago another example of the same type was purchased, though in this case the bent wooden rod is replaced by an iron one. This twister, which came from Ballastrang in Kirk Malew, was evidently made in a local smith, and is obviously fairly ancient.

The second group (d-f) represents a different tradition, related in design to the carpenter’s brace-and-bit, though in principle this is just an improvement on the hook-shaped rod of our first group.

Figure (d) – Last year Mr E Maddrell presented to the Museum the wooden twister from Cregneish. It consists of a long bar with two shorter rods at right angles, one notched for holding the looped end of the straw rope and the other perforated to receive a T-shaped handle, which is the counterpart of the loop on the other examples. Mr RU Sayce, Director of the Manchester Museum, tells us that this is a type of twister used in West Wales. The present example must be of quite recent manufacture to judge from the kind of nail used to peg the short arms into the long rods.

Since writing the above another twister, similar to that from Cregneish, has been presented to the Museum by Mr John Corkill of Ballaugh village. Mr Corkill tells us that he made this instrument over 40 years ago at Cammall, Kirk Michael, and that it was a familiar type of twister.

Figure (e) and (f) – These twisters have been given to the Museum this year by Mr Costain of Ballagawne, Rushen. The former is more primitive in construction but apart from the loop, they are the same design. In (e) the two cylindrical grips are of wood‡‡ while (f) is made entirely of iron. The loop of the latter must have been for attachment to the belt, the task of the left hand being thereby reduced to giving additional rigidity to the end of the implement. The stop at the base of the right hand grip has been formed in the casting of the crank. This is perhaps an imported implement, though it is too soon to be quite certain about such a point.

The third group (g) is represented only by the implement from Rhencullin, Kirk Michael. It was given to the Museum in 1925 by Mr JR Quayle of Kirk Michael who tells us that it came from Mr John Thomas Cannell, blacksmith and farmer at Rhencullin.

In principle, this example resembles the crank of a motor car, the short grip at the end being the section which was rotated while the long grip must have been held firmly in the left hand. Mr Sayce has drawn our attention to similar tools from Cheshire and Gloucestershire. It is a type with a long history in England as the principle was employed in rope-making in the 14th century.

* Kinnish’s pony was probably one of the small, shaggy Manx ponies which have been extinct more than half a century. They were much used for hill transport.
‡ a slouree is a wrought iron bar made by the local blacksmith, hung inside the chimney and over the chiollagh (hearth). It was used to suspend a cauldron / pot or a griddle over the open fire, and had holes in the bar so the pot height over the fire was variable with the adjustable chain.
** We have seen suggane twisted on a hayrake (at Ballabrooie) and on several northern farms a galvanised bucket handle or the handle of a milk-pail is now used in place of the proper tool.
*** Mr Kneen tells us that ‘coar’ is the only manx name for rope twister known to him. Kelly’s Dictionary gives ‘coayr’ or ‘throor’, ‘an instrument with which they twist straw-rope, hair-rope etc. The Manx name for rope of horse hair was ‘tedd geaysh’ according to the same authority.
‡‡ The grip for the right hand has perished but there is evidence to show that it was of wood.