A monarchy under a feudal system was a political machine from which the element of free choice was as far as possible eliminated. A ruler, whether king or lord, ruled by right of primogeniture, where all authority passed to the eldest son and those subordinate were bound to him and his heirs.  On the other hand, in Celtic law as well as Norse law, the ruler was chosen by election from a number of persons eligible by right of birth, and could be deposed by lawful choice. In the early Celtic period in Ireland, and almost certainly in Man, Kingship was heritable. All the ‘true family’ of the reigning king or ‘jarroo-firrinagh’, as it was spoken in the Manx tongue, became potential heirs to the kingship and capable of succession. When the king died the vacancy was filled by election.  Our Tynwald was not originally a place of legislation; it was a place of promulgation and inauguration of the king or of the ruling chieftains. On the place of the inauguration was the Tanist stone. Tanistry was both the Celtic and the Norse mode of tenure according to which the king or chieftain was chosen from the family. For instance Tullyhogue in Country Tyrone, Ulster, was the place of the inauguration of the O’Neills; and the rock of Donne, in Donegal, the place of the inauguration of the O’Donnells. The rite lapsed in Ireland under James I in the 16th century. The Tanist was always inaugurated during the king’s or chieftain’s lifetime. He was not always the king’s eldest son, but a member of the family within a defined degree. In Queen Elizabeth’s I’s time, when the O’Neill power was suppressed, the English soldiery were ordered to break inpieces the Tanist stone at Tullyhogue.

That our own Tynwald mound was both the place of inauguration of the Kings of Man and that of the Tanist, on which the heir-apparent was inaugurated, may be inferred from two conspicuous incidents in connection with the Scropes and the Stanleys on their becoming Kings of Man. We have a record of a Tynwald held at St. John’s in 1392, the year Sir William Scrope became King of Man by purchase of the regality from William de Montacute, 2nd Earl of Salisbury. On that occasion Sir William Scrope was not only proclaimed and accepted as sovereign but also his younger brother Sir Stephen le Scrope, the heir, was accepted as successor. Again in 1405 when the first Sir John Stanley was proclaimed king, his son, the second Sir John, was acknowledged as heir-apparent by the barons, worthiest men and commons. And the ‘Chronicle’ evidently refers to such an instance in the 12th century:

“Godred during his life had appointed Olaf to succeed to the kingdom for the inheritance belonged to him by right because he was born of lawful wedlock; and he had commanded all the people of Man to appoint Olaf king after his own death and to preserve inviolate their oath and allegiance.”

From these instances Tynwald would appear to have been not only a place of Proclamation of the new king but also the place of Inauguration of the Heir-Apparent; and this in its essentials was the Tanist system – surviving in the Isle of Man in the 15th century.  There must have been those in far-off times a customary formal ceremony of initiation or swearing upon a stone, on the part of the Chosen One. It is natural to look to the records of the Outer Isles, so closely associated with Man, for any evidence of this custom there. The Macdonalds of the Isles, claiming to be descended from Somerled, son-in-law of Olaf I, King of Man and the Isles, 1103-1153, clung to the custom of what they termed ‘the inauguration of the Lordship of the Isles.’ The solemn ceremony is described by Martin in his ‘Description of the Western Isles,’ published in 1703. It took place in the islet of Finlaggan, which is in a loch in the isle of Islay. Islay, it will be remembered, was the chief of the Islay group of the South isles, which sent four members to Tynwald.  At Finlaggan, says Martin, Macdonald had his Court of Sixteen chieftains, presumably in the open air.

“There was a big stone of seven feet square, in which there was a deep impression made to receive the feet of Macdonald; for he was crowned King of the Isles standing in this stone; and swore that he would continue his vassals in the possession of their lands…The Bishop of the Isles and seven priests anointed him king and a white rod was put in his hand.”

Another Macdonald family account says that on the stone was cut ‘the tract of a man’s foot.’ Although the actual Lordship of the Isles had nominally ceased over two hundred years prior to the date at which Martin wrote, yet the custom of his day was in all probability modelled upon the time-honoured ceremony of the crowning of the ancient Lords of the Isles at Tynwald.

The custom of crowning the king upon a stone was recognised by the Scandanavians.

‘Near the city of Upsala there is a large stone in a field which they call Morasten. The senators used to meet here to choose and crown the king, who stood on the stone.’

Professor Marstrander states that according to a 10th century manuscript, a certain Prince is recorded to have sworn an oath, having first placed his foot ‘within the accustomed stone.’ The Icelanding Saga of Hen Thorir quotes:

‘Herstein the bridegroom leapt up to where there was a certain stone: then he set his foot upon the stone and spake: This oath I swear hereby that before the Al-thing is over...’ etc.

Discussing the problem of the Conchan Treen ‘Tremott’ (1511) and its modern spelling Tromode, Marstrander says the name the ‘Treen-mót’, ‘the place where the folk met to discuss their interests.’ The only mound which could by any stretch of the imagination be claimed as a possible moot-hill in that or the adjoining parish is the one marked on the Ordnance Plan of 1867 as ‘Castleward Fort.’ Anciently it was called in Manx ‘Knock-y-Troddan,’ hill of the contest. This place-name is not now used. In the 1511 Manorial Roll the name of the Treen in which it stands was written ‘Castell-ny-Ward.’ The name is from the same root as the Norse ‘mót’, a meeting, which we find in the Treen name Tremott. To talk of a scheme being mooted has the same meaning. The Manx Gaelic translation would be ‘Cashtal-yn-Vód,’ the castle of the assembly place.

The earthwork has never been examined by archaeologists, but it is believed to be, like the hill at St. John’s, of the Bronze Age. There is a story that while Tromode men were once looking for the traditional ‘crock of gold’ a cinerary urn was taken from it. The story was told to the writer in 1895 by the manager of the sailcloth factory nearby. John Kaneen, the owner of the farm, told the writer that in ploughing-time he had found in the field below the mound, what appeared to be stone graves, probably early Christian. Castleward is the most interesting ancient monument in the sheadings of Middle or Garff. As a ‘THING-MOTE’ it is imposing, and far more primitive looking than that at St. John’s. If Marstrander is right in assuming that Tremott Treen got its name from its association with a Mót Hill, Castleward is in all probability its site. The fact that it is in Kirk Braddan and not Conchan parish would make no difference at the period of its use. G.H. Wood, a local poet, wrote in 1827:

The absence of any detailed information of the ritual observed locally in the ceremony of the swearing-in of the new king or lord has already been remarked upon. There must, however, have been, on such occasions, a prescribed sacred rite, as we know was the case in the Outer Isles. 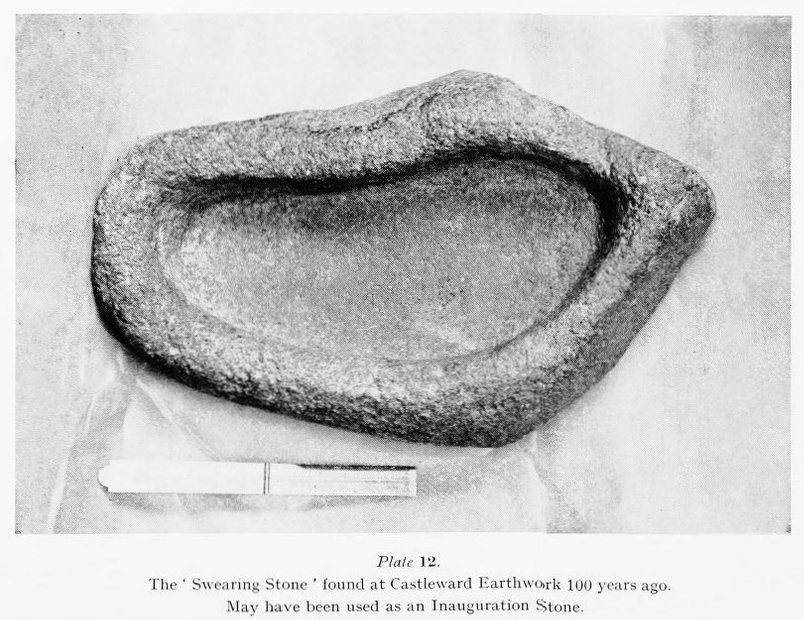 The finding of what may reasonably be called in ‘inauguration’ or ‘swearing’ stone at Castleward not only adds support to the belief that it was a mót, but also that it was the actual place of the swearing-in of the king or lord. The stone is here illustrated (see photo). It was found, so John Kaneen, the owner, told the writer, over a hundred years ago by Colonel Mark Wilks of Kirby, who had been the landlord of the farm from 1828. He had bought the property from Paule Gellen, in whose family it had been for upwards of three centuries. Wilks did not take the stone to his residence at Kirby, but left it on a sod fence close to the site of the keeill, near the farm street. It was for many years used by the Kaneens to give ‘feed’ to the poultry. It was re-discovered by the writer in 1916, and after the founding of the Manx Museum, it was placed there. On examining it for the first time, Director Philip Kermode said: ‘It looks very like a swearing stone,’ and it was so labelled. In his description he recorded it has having been:

‘patiently hollowed out of a well-chosen boulder of basalt. Its length is 24” x 10” wide and 8” to 9” high. The cavity is carefully carved out, and has all the appearance of having been formed to comfortably take a human foot. The space for the foot is 18” long x 6.5” wide, and is smoothly etched by the carver to a depth of 3.5”.’Its date, according to Kermode, is probably 11th century. More than one British archaeologist of repute has studied and admired the object. One, Professor McAlister of Dublin University, after examining the chiselling said, ‘You have obviously a counterpart of the famous ‘Lia Fail’, or ‘Stone of Destiny,’ on which the ‘Ard Ree’ or ‘High King’ of Ireland stood when he was being crowned. But your example is certainly more fitting and more impressive than the one that came from Scone.’

(source: text, photograph of the ‘Swearing Stone’ and the sketch are from Island Heritage by William Cubbon (1952))