by Bernadette Weyde April 4, 2020 1,098 views
First time leaving the house in two weeks…so after some much needed shopping, I had to go to St John’s to drop something off and enjoyed a quick visit to the Hill and across the road to the Ballaharra Stones.

In 1971 whilst an extension to the Ballaharra Sandpit was taking place, a chambered tomb and an extensive cremation deposit was discovered. Sadly the chamber had been disturbed but it was excavated by Miss Sheila Cregeen a local archaeologist from Peel and was discovered to be one of the Island’s ten megalithic tombs.
The tomb appeared to have had two chambers and was thought to have belonged to the same Neolithic tradition as Cashtal yn Ard in Maughold and King Orry’s Grave at Laxey.
A fine range of flint implements and pottery, including some with distinctive decoration were discovered, similar to articles only previously found at Meayll Circle. An urn from the Bronze Age was also found.
Ballaharra was the most important site on the Island for Neolithic pottery. The site yielded radio carbon dates of circa 2,300 BCE.
Six large stones were found, unfortunately two were crushed and the four remaining stones were kindly donated to German Parish Commissioners by Keith and Allen Corlett who now own the Ballaharra Sandpit.
The Commissioners re-erected the stones on this site (which was the old Village Pinpound) as a Millennium project in 2000/2001.
The above text is from a placard at the site and there is also a placard about the Pinpound which is recorded below. 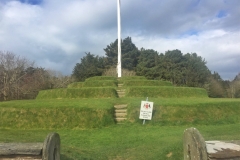 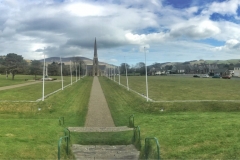 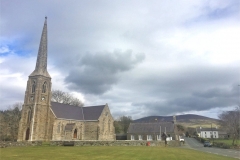 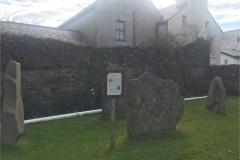 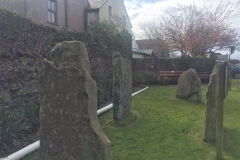 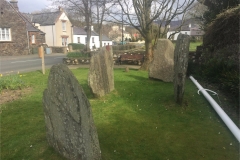 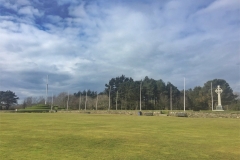 In every Parish on the Island there was a small fenced enclosure know as a (pin)pound, or pinfold, where straying animals were impounded. From very early times farmers had to provide against the risk of damage caused by domesticated animals straying from their proper pastures.
We do not know when pounds were first established for the detention of straying animals but English law, maintained and supported by the Normal Lords, established in the village the post of Pounder, or Pindar, who was given certain privileges for the service of receiving straying animals and confining them in the village pound until claimed by the owner. If they were not claimed within a year and a day, they became the property of the Lord of Mann (the term ‘animal’ being freely translated to include chicken, ducks, even swarms of bees). The Pindar was not, however, responsible for the upkeep of the pound, that has always been a parochial charge.
References to the Parish pinfolds are to be found time and again in the Manx Statutes. The earliest mention in the Stanley code of laws of about 1420 orders that they be set up and repaired as in old times. In the following century it is laid down that there shall be a ‘pinfold’ in every Parish with lock and key, the key to be held by the Mooar, the Coroner or ‘some honest man living nearby.’
Later the price to be paid for the release of an animal is laid down as a halfpenny per hoof of each animal retained. This sum went half to the Lord and half to the pindar. If no owner could be found, notice was to be set up on the church door and in the local markets.
In 1667 a statue was enacted stating that before a stray animal or flock were released the cost of any damage done by the ‘stray’ must be properly met. In order to meet the requirement of increased care in times when fields were under crops, the fines applied during Summer months were greater than those in Winter. These fines were steadily increased.
In 1776 the charge on cows, horses, swine and mules was 2s 2d (two shillings and two pence) in Summer and 1s 2d (one shilling and two pence) in Winter, and for sheep and goats 8d (eight pence) Summer and 6d (six pence) Winter, and geese 4d (four pence) and 3d (three pence) when half the cost went to the pindar and half to the drover bringing the animals in. At the same time, heavy fines were imposed on any person attempting to rescue the herd or beast without payment. This statute also ordered that hedges which had previously been 4.5 feet in height were to be over 5 feet in future.
Possibly the best known of the pinpounds is the St John’s pound where you are now standing which is the pound of Kirk German and directly opposite the south door of St John’s (The Tynwald) church.
In 1963 the Pinfolds Act was established to abolish the Parish Pinfolds and to provide for the impoundment of animals in Government Pinfolds maintained by the Isle of Man Board of Agriculture & Fisheries; this responsibility later passed to the Government Property Trustees.
All photos by Bernadette Weyde
0
FacebookTwitterPinterestWhatsappEmail