If we turn back the pages of maritime history during the past couple of centuries or so we will find that Manx skippers and sailors played a notable part in battles, sea encounters and adventures of various kinds and many a story has been recorded of their bravery.

One of the greatest Manx heroes was Captain John Quilliam who steered the ‘Victory’ into action at Trafalgar. He was born a fighter, a man who was absolutely fearless. His gallantry and professional skill at the Battle of Copenhagen attracted the notice of Lord Nelson who brought him to his own ship. Quilliam, who was born in Marown, married a Miss Stevenson of Balladoole, and is buried in Arbory. Two days after his death his commission as Admiral arrived on the Island. 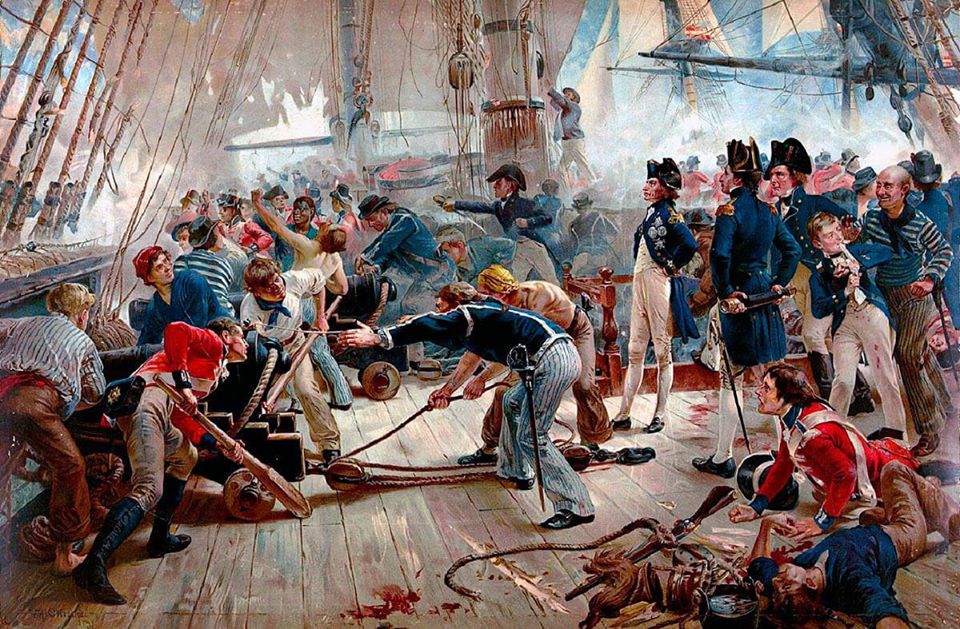 Another Manx sailor, grandfather of the late JT Cowell, MHK, lost his arm at Trafalgar and another Manxman named Lace, who is buried at Kirk Bride, lost a leg on the same day.

Another Bride man on the ‘Victory’ was named Cowle, a quartermaster or boatswain. It is stated that when the captains of the enemny ships hauled down their flags and came aboard the ‘Victory’, it was Cowle who received the swords back from Nelson after he had received them.

Another prominent Manxman in the annals of the sea was of course the mate of the Bounty, Fletcher Christian, and the midshipman, Peter Heywood, came from the Nunnery.

For the record too, Illiam Dhone, who was shot on Hango Hill, was a sea captain.

Then there was a Captain Skillicorn of Kirk Lonan who, over 200 years ago, sailed from Bristol. Skillicorn, it was said, was the founder of Cheltenham as a watering place because he drew attention to its mineral springs and its health-giving properties. Capt. Skillicorn once made a gift of £20 to Old Lonan Church.

John Gill, son of a Vicar of Lonan, was another well-known skipper.

Capt. Kerruish of Sydney, is remembered as the man who first brought out to Japan a number of English constables to serve as a model for the Japanese police; he also carried the materials for the first lighthouses in that part of the world.

Another Manxman named Capt. Bell saved the members of a ship’s crew when their craft went ashore on a reef. He brought each man back to safety and it was said that he could ‘swim like a fish.’

Tom Mylechreest, a brother of the *‘Diamond King,’ followed up the famous 92 days’ voyage of the schooner Vixen from Peel to Melbourne in 1853 by taking a Peel sloop a few years later to Sydney. This was the Peveril.

Outstanding too, was Capt. William Christian, son of a Vicar of Malew. He was educated at King William’s College with the intention of entering Holy Orders but he switched to the sea as a career. He was highly intellectual and could read both Latin and Greek books. He took great interest in his apprentices and held classes in which he instructed them in navigation. It was a boast of his that during the whole of his time at the sea he never required to ask the latitude of any ship though he had been scores of times requested to do so by other ships. He was at sea from 1834 to 1884 and after 50 years’ service he retired to his home in Tranmere where he died in 1896 at the age of 78 years.

A remarkable story of Capt. Christian was related some years ago in the PSNC Magazine ‘Sea Breezes’ which recalled the foundering of the ‘Bates Family’, bound for Australia with 269 emigrants aboard, including a number of women and children. The vessel was leaking badly and getting beyond the control of the pumps.

Capt. Christian was at the time skipper of the British India on a voyage from Sydney, NSW to Rangoon. When, having his afternoon snooze, he dreamt that a ship was in distress – that night the dream was repeated but it was a clearer vision this time showing the danger to women and children. Next afternoon the dream came again. Capt. Christian ordered a close watch to be kept for flares and towards sunset sent an apprentice aloft. Back came the report that there was a large whale on the horizon right off port bow. The captain went up himself and with the aid of glasses, sighted a large dismasted ship. He at once altered course and as the wind was light, did not reach the distressed ship until dawn. The boats were launched and all on the ‘Bates Family’ were finally saved only a short time before the vessel settled down in the water and sank.

Had not Capt. Christian received this warning in a dream, in all probability the ‘Bates Family’ would have gone down with all hands lost because in those early days it might be a week or a month before a vessel would pass that way again.

Another master – Robert Edward Christian – who was born at Baldromma, Maughold was apprenticed as a ship’s carpenter at Taggart’s Yard at Ramsey. He showed some enterprise later when he purchased a vessel which had been hit by another ship and run ashore at the Point of Ayre. He repaired it and sailed it for some years. He was skipper of numerous other ships after this and was for the most part engaged in the North American timber trade. In 1876 he retired from the sea, then became a ship’s broker. He composed Manx songs and carols which later appeared in a book published in 1891.

Capt. Oates of Ballacraine, St John’s who died in 1873, had a notable career, also William James Gell, who was born in Patrick and entered the service of the East India Company about 1865. He became mate on one of the vessels owned by the well known firm of T & J Harrison of Liverpool and served for 30 years. He died in 1895 and was a great navigator and also known for his inventions for saving life – he introduced five of these.

(source: Isle of Man Courier 18 Sept 1959; artwork is of the Hero of Trafalgar by William Heysham Overend http://bit.ly/2wgCcOn; the Vixen by unknown artist http://bit.ly/2wcWx7r; courtesy of the imuseum)

* The ‘Diamond King’ was Joseph Mylechreest (b.1837, d.1896), the third son of John Mylchreest, a Peel smack-owner, and Christian Moore. He was educated at Gawne’s School in Peel, and, on leaving it, was apprenticed as a ship’s carpenter in that town. After five years of this employment he went to the West Coast of Africa, where he worked at his trade, but, being excited by the account of the gold discoveries in Australia, he went to that country in 1860. From thence he wandered to New Zealand, California, British Columbia, Bolivia, Peru, Chili, and back again to Australia, working off and on in gold and silver mines, but with no great success, till, in 1876, he went to the diamond mines at Kimberley, in South Africa. Here, at first, fortune was not kind to him, but, with his lease of the Royal Mining Company’s Works, a change came, and he gradually acquired a most valuable property, which he disposed of to the De Beers Company for an enormous sum. 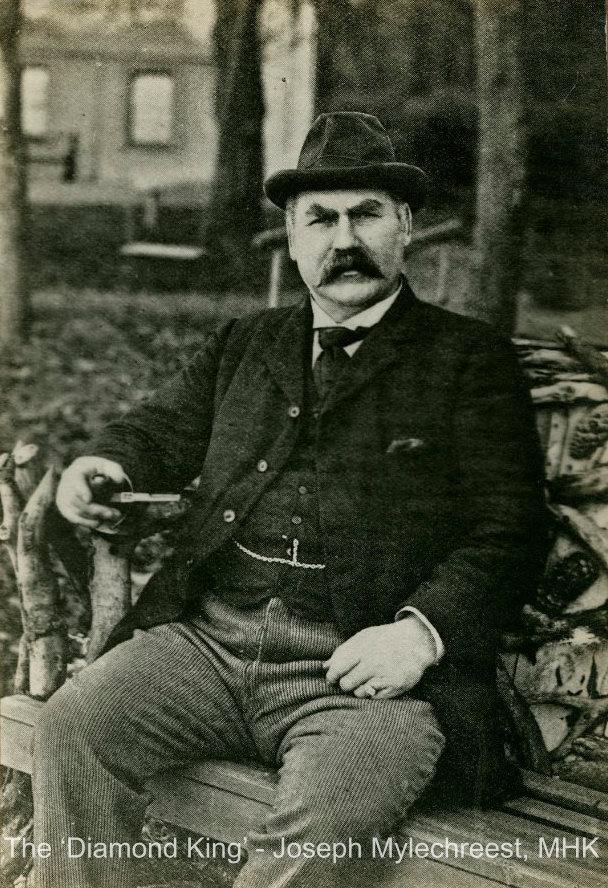 In 1888, he returned to settle in his native country, where, till his untimely death eight years later, he did much for its good by the money he spent in charity and in encouraging agriculture. He was elected a member of the House of Keys for Peel in 1891, and was made a magistrate shortly afterwards.

“The Diamond King,” as he was usually called, was a man of magnificent physique, with a somewhat rough exterior which concealed a kindly heart and great shrewdness. It can be truly said of him that he never turned his back upon an old friend, however humble.

(source: Joseph Mylechreest entry from Manx Worthies by A W Moore (1901); photograph courtesy of the imuseum)

Wreck of the St George & the Tower...