The Nikkesen’s Pool, more often called simply “the Nikkesen,” is in the Awin Ruy near its junction with the Glen Roy river. It is shut in on the North side by a high, concave wall of rock over which the stream tumbles into a pool screened by small timber.

Nikkesen was a water-sprite who appeared sometimes in the form of a horse or pony, like the Glashtyn and the Cabbyl-ushtey, sometimes as a handsome young man who drew human beings, chiefly girls, down into his abode beneath the water. When so engaged, his traditional pathway to his pool was the streamlet, now usually dry in summer, which runs into it from the South. Their bodies were never found; but round the little green meadow below the pool, by the light of the full moon he would lead a singing and dancing procession of his victims. The people would gather on the broos above to watch, while Nikkesen and his ghostly company trooped round and round the field and then danced in a circle. He was also seen occasionally in his equine form, roaming about the hazel-woods of Glen Roy. The legend as I have heard it does not describe the method employed by the Nikkesen to lure mortals down to his unfathomable dwelling-place, but I venture to supply the omission by suggesting that the bait he used was some kind of music; for there is a strong resemblance between him and Hom Mooar, Big Tom the Glashtyn or waterhorse who sometimes wore human shape and decoyed unwary listeners into places from which they seldom returned. His headquarters were the Fairy Hill, Rushen.

The word “Nikkesen” evidently belongs to the Germanic series of Nikar, Nikuz (Old Norse), Nichus (O.H. German), the Gothic Nichor and his Anglo-Saxon cousin the Nickar in Beowulf, who was last seen in Sussex, the Highland Nixie, and innumerable other variants; and Nikkesen the sprite, in the days when his appearance was more familiar to the country people than it is now, must have looked very much like his Germanic relations.

Thorpe (Northern Mythology, i., 246) describes the German Nixen as resembling in form a human being, though smaller. “According to one tradition, the Nix has slit ears, and is also to be known by his feet, which he does not willingly let be seen.” These, we may suppose without doing him an injustice, resembled horses’ hoofs. “Naked Nixen, or hung round with moss and sedge, are also mentioned.” The male water-sprites of Germany, he says on page 248, “carry off young girls and detain them in their habitations and assail women with violence.” But they had their moods of clemency, for Grimm tells us (Teat. Myth., 492) that “at evening up come the damsels from the lake, to take part in the human dance, and to visit their lovers;” and the Nikkesen’s passion for music and dancing is equalled by that of his counterpart in Sweden, where “they tell of the Stromkarl’s [Streamyouth’s] alluring enchanting strain; his lay is said to have eleven variations, but to only ten of them may you dance; the eleventh belongs to the night-spirit and his band. Begin to play that, and tables and benches, cup and can, greybeards and grandmothers, blind and lame, even babes in the cradle, would begin to dance.” Of the same quality no doubt, was the playing of the now forgotten Hom Mooar. It is the true Orphic and fairy music, all the world over! Mortal musicians con it by flowing waters, to bring home only the faint echo in their memory; and it may be well for our peace of mind that they can do no more.

The toll of human life taken by the treacherous element would suffice to explain a spirit who preyed on human beings, ‘but the tradition of his preference for girls, and the frequent association of the word ‘inneen’ (girl, daughter), and its equivalents in other languages with so many coastal and riverine rocks, pools, lakes fords and waterfalls, combine to suggest that a long time ago the drownings were not all accidental – that some at least were sacrifices to the indwelling spirit of the place. By these he would be sufficiently appeased to spare the more valuable lives of men, to refrain from trespassing on their lands, to keep their wells filled, to provide them with plenty of fish and sea-wrack, and to perform all the other duties of a Water God. Perhaps I had better add that as the legend of the Nikkesen did not originate in the Isle of Man, sensitive patriots are not obliged to believe that human sacrifice was practised in their island.

There is a deep dub, or pool, on Ballacoan stream, which the children of Laxey call Nikkesen’s. It is the home of Nyker, the Water Goblin. It has no bottom and brambles and ferns are growing round it, and fir trees and hazels are hiding it from sight. No child, no grown-up person even, will go near it after dark. 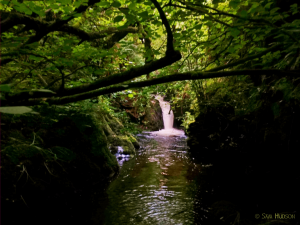 A great many years ago a beautiful girl living at Ballaquine was sent to look for the calves, which had gone astray. She had got as far as Nikkesen’s, when she took a notion that she heard the calves over the river in Johnny Baldoon’s nuts. At once she began to call to them:

Then came a little sweet voice through the mist and the trees in answer:

And that was all.

The Fairies who live in Nikkesen’s had pulled her in, and carried her to their own home.

She was never heard of again.

Note: Kebeg was the word used to call calves.

Thanks to Sam Hudson for the photographs.