Childhood Memories Between the Wars

It is difficult for people living in today’s world, with the generous Social Services system, to imagine the hardships of earlier days among the population – let me tell you something about those years in Douglas before World War II.

Modern plumbing for instance, was not in a very advanced state and the majority of toilets were in the back yard.  They were set in a stone base with a long wooden board on top and a hole cut in the centre.  The toilet paper was newspaper squares.  These had a string through the corner and were hung on a hook on the inside of the toilet door.

During my school days, school dinners were provided by the Douglas Board of Guardians but only for needy children, who, obtaining a ticket from the school teacher, were entitled to a free dinner at Nobles Hall in Westmoreland Road.  Clogs were also given to boys and girls whose parents could not afford to buy shoes for them in wintertime and there were a great many in this category as unemployment was widespread.

In the days following Word War I, the children of Servicemen who had died in the war were provided annually with black boots, woollen stockings and warm underclothes from money supplied by charitable organisations.  Those who were fatherless were eligible to join ‘Lady Raglan’s Club’ – Lady Raglan was the then Governor’s wife.  I still recall when I became a member, when my mother was informed by letter that Lady Raglan herself would call for me at my home on the occasion of my first day’s attendance.  You can imagine my excitement when a large, chauffer-driven car – a rarity in those days – arrived at our front door and I was invited to sit  inside the car beside her Ladyship to travel to her club!  This was held every Saturday at a large house, ‘Frances Villas’ on Woodbourne Road, and on arrival there I was given a glass of milk and some biscuits and introduced to other boys and girls.  We were provided with dinner and tea during the day and one particular item of food which I have always associated with the dinners was maize pudding.  There was a large playroom with toys, games and books provided for our pleasure and enjoyment and at the rear of the house was a lovely big garden where, when the weather was suitable, we could entertain ourselves all day until about 6pm when we would be collected by a relative and taken home.

A great boon at that time was the Soup Dispensary in Myrtle Street where needy folk could go each day at noon, taking a large jug, bowl or suitable container, have it filled with hot, freshly-made, nourishing soup or broth, and be given some bread to take home for their family’s dinner.  The meal was free and was greatly appreciated by the recipients who would otherwise have no dinner.  It was provided from funds from the Henry Bloom Noble Trust, and was prepared and served for many years by Mrs and the late Mr Albert Moore, MHK, who were employed by the Trustees of the Fund.  Today, for all to see, there remains the carved stone tablet over the front door of the house, 11 Myrtle Street, the inscription upon it reads, ‘Douglas Soup Dispensary, Erected for Charitable Purposes out of Henry Bloom Noble Trust Funds, 1908’.  Incidentally, Mr Moore was a great worker for the poor of Douglas. 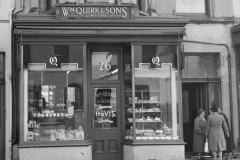 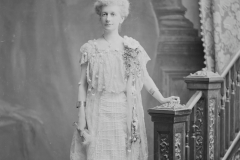 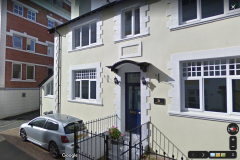 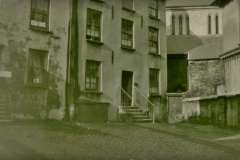 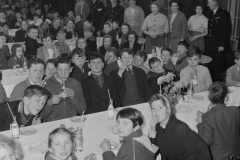 During these years there was much poverty in Douglas as many young men had difficulty finding work or becoming apprentices.  Unemployed people had to register every Friday at the Board of Guardians’ Office on Harris Terrace, Douglas – this was known as ‘Going to Uncle Harry’s’.  This was because the man in charge of the distribution was Harry Dyson.  They were given 10/- (ten shillings, 50pence today) with a little extra for families, not cash, but in food vouchers, on which they had to exist until the following week.  No money for rent so you could imagine the difficulty in bringing up a family and keeping out of debt.

At Christmas-time the unemployed were given a special treat, they went to Quirk’s bakehouse in Back Strand Street on Christmas morning at noon for the Hot-Pot Distribution.  There was a large tin dish for each family – the size of the dish depended on the number in the family – filled with delicious, mouth-watering hot-pot, consisting of plenty of meat and onions and potatoes, all piping hot and brown on top, and enough for two days!  Each man also received half a pound of tea, and two or three fresh baked loaves.  How busy Mr Quirk’s staff must have been all Christmas morning!   The Board of Guardians provided this treat otherwise many would have had no Christmas dinner.  The tin dish container was also an acceptable gift.

Neither were the children forgotten at the festive season.  The Police Officers of Douglas provided needy children with a special treat, the Policemen’s Hot-Pot.  To be a partaker you collected a ticket from the Police Station in Church Street and on a special day at Christmas time, all the children gather outside Noble’s Hall in Westmoreland Road.  When the doors opened, there was an immediate rush of eager, excited boys and girls to the long trestle tables laid out ready for the feast.  All this had to be prepared by the Officers and when all were seated, grace was said, then the excitement turned to an outburst of ‘Oohs’ and ‘Ahs’ as the Police themselves brought in the heaped plates of succulent, nourishing hot-pot and placed them before their guests.  No sound was heard then but the clink of cutlery on plates.  ‘Does anyone want any more?’ was asked and of course, everyone did!  When justice was done to the hot-pot, the pudding was served.  Real Christmas pudding with white sauce poured over!  As much as you could eat!  None of the children had ever had a feast like this before AND everyone received a bottle of pop with their dinner.  There were groans of contentment and satisfaction as the children thanked the Police Officers.

But the treat was not yet over!  They all assembled in an orderly fashion to walk from Noble’s Hall to the Royalty Cinema for a film show incorporating all the comedies of the day and when they left the cinema show there were the Police again, this time giving each child an apple, an orange and a bag of sweets!  What a memorable day!

With this glimpse of life in earlier days in Mann, you can realise the hardships – and simple pleasures – of the ordinary men and woman, and why they were so thrifty and cautious in spending money.  ‘If you can’t afford it, do without it’ was their guidelines.  Yet they were invariably happy people, always hoping for better days ahead, were more neighbourly and ready to help each other and they were very proud of their Island heritage – its songs, its culture, its folklore and its great history.

source: ‘Something Different – Personal Aspects of Life in Mann‘ by Ivy Barry; photograph of Myrtle Street courtesy of Google Maps; all other photographs courtesy of the imuseum.im.  The photograph of the children is from a later period as earlier ones could not be found.

Around the Manx Farmyard