A lovely scene at Maughold with a traditional Manx thatched cottage and perhaps a mucklagh giark (hen house) to the side as some hens are pecking away at the ground. It looks like that area has been cleared too as some cut shrubs are lying near the gable end of the house. Though often at a gable end, could that be a young Tramman (elder tree) growing at the front of the house to help the Little People travel between this world and the Otherworld? And what is that mighty piece of stonework behind the chickens with the big hole in the centre? That looks very interesting!

The most spectacular thing that elevates the scene is the Cross on the grass…how amazing it must have been to have had that outside your door. PMC Kermode writes:

‘The fine slab at Maughold differs in character from any other in the Island. The form of the cross, with shaft and head of almost equal length and the arms very short, is peculiar.

The face we see is divided into two panels. The cross in the upper one is plain; at the sides, twist, double-beaded step, plait-of-three, and an irregular square loop interlacing; the panels enclosed by a cable moulding border. A lower panel is separated by double spirals and key designs, and contains rude scroll work, key, and irregular plait-of-three, with a triquetra, and figures of stag, hind, hound, and man on horseback. One edge has angular key-fret, diagonal rings, spiral designs, and plait-of-three; the other a curious design of curved lines and cup hollows, suggesting a twist; also a square four-fold ring and plait-of- three.’ 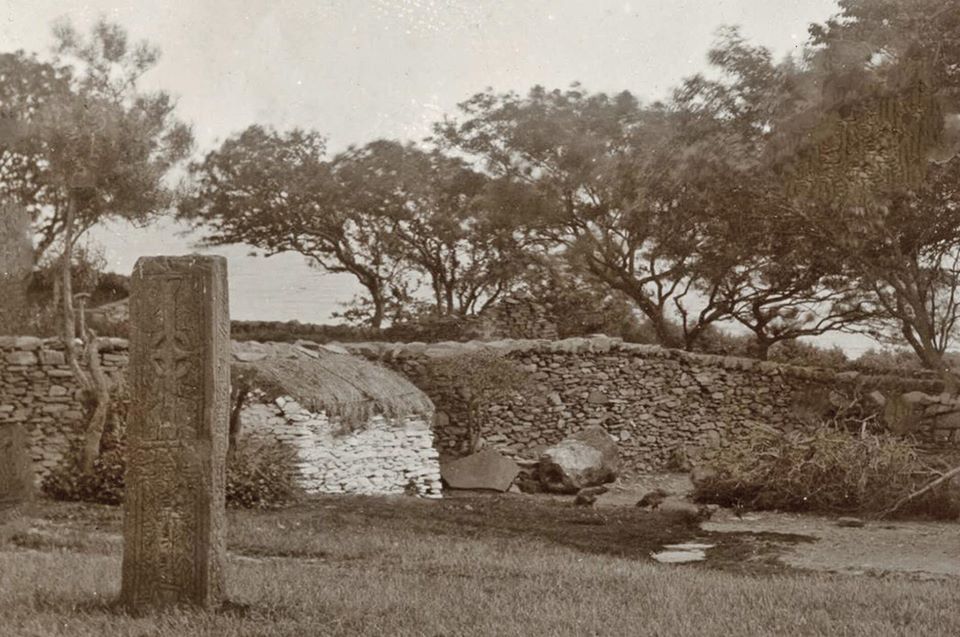