Close to Orrisdale, this monument is a Bronze Age burial mound and easy to access via a public footpath though it is on a working farm with livestock.

Having crossed a field with a lone cow and going through the second gate, the next field had quite a few sheep and cattle, including a big bull fella. As you approach the mound there are two quartz gateposts to pass through which may have originally formed part of the Druid’s Circle. Five further ones are reported on the mound itself and these originally formed a complete ring, but it is so overgrown with gorse I only saw two of them.

The site is on a prominent glacial ridge running parallel with the coastline and at the edge of the cliffs you can see the sandy soils and some erosion. 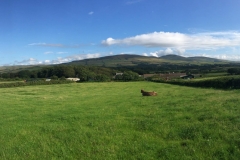 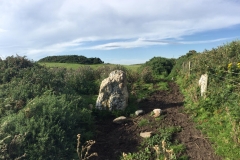 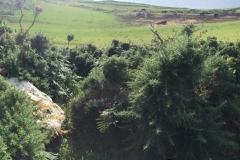 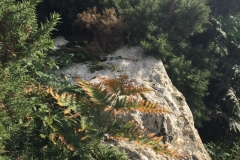 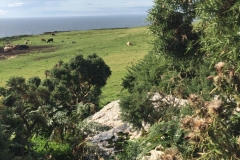 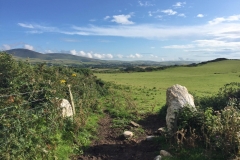 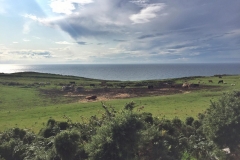 (photographs by Bernadette Weyde; acknowledgment A Guide to the Archaeological Sites of the Isle of Man up up AD1500 by Andrew Johnson and Allison Fox)